1. Elvarhøi – ‘Dansen låter fra graven åter’
With 25 out of 40 points Elvarhøi managed to claim the title ‘Best Debut-album’ this year. Voted ‘best’ by two members, they reached the first place. After 15 years of existence they released their debut-album.
” A now brainer this releasedate, because it’s Elvarhøi’s 15 anniversary.
Despite the fact I won’t advise this schedule to any other band, it can be heard for sure. When you listen to ‘Dansen låter fra graven åter’, you can’t imagine this is an debut. The musicians are not only skilled they obviously know what they want and can achieve this together. “

5/6. Aegonia – ‘The Forgotten Song‘
On a shared 5th and 6th place there are two album with 15 points, the first one is the Bulgarian band Aegonia.
“Overall, there is clearly a praiseworthy amount of effort that went into creating the album in terms of the editing and musical skill required. The group’s mastery of composition can be found by simply looking at the classical influences on this album alone, which manage to steer the entire album in a neoclassical folk direction while keeping enough Metal influences in the mix to keep their credibility.”

Well, it’s December again. Time to make up our lists. Like you’re used to by now, you’ll get two lists from Folk-metal.nl. One with the best album of 2019 en one with the best debut-album of 2019.
Last year Zmey Gorynich with ‘Mother Russia’ was chosen best debut-album by our team.
This year four or our teammembers could find the time to rate the debut-albums. Each member rates all debut-albums we reviewed this year. While the rating in a review is ‘just the opinion’ of a single Folk-metal.nl teammember, it’s more than possible an album which received a lower rating ends up with a position higher then an album with a high rating.
And our opinions have never been so different as this year. You will announce a band on this list each day for ten days, to end up with our Number 1! After that we will continue with our album of the year. And don’t worry, there are album to be released this year, but we have already listened to the most of them.
Remarkable list from the beginning at the 10th place we find an album, which was chosen the best one by one of the four voting members.

Be warned…….there is a band of trolls coming to tear your head off with some amazing new music. Sweden’s Bergatagen have just issued their debut album “Bärsärkatoner” and it will definitely screw you up. Filled with classic troll black metal and some folky touches, it is definitely a contender for debut of the year for me. Two of the trolls, Svartgrimme and Huggsint answered some questions for us lowly humans regarding the name, the music and the possibility of mangling the crowd if they ever played live…check it out….. 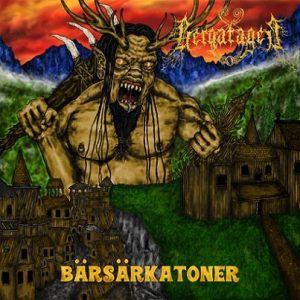 By: JeffRating: 9.5/10Release: 8 February 2019Label: Independent / Bandcamp There are always one or two albums every year that make me gasp when I hear it the first time and Bergatagen got me with their seemingly debut album “Bärsärkatoner” (don’t ask me for translations as I couldn’t find any and … END_OF_DOCUMENT_TOKEN_TO_BE_REPLACED

From a long and difficult start to an amazing album (2019)