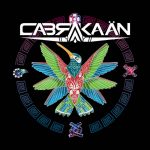 Rating: 7.5/10 Release: 27 August 2019 Label: Sliptrick Records The band Cabarakaän had been founded in 2012 in Toluca, Mexico and later relocated to Calgary, Canada. However the lyrical themes are still about the pre-hispanic times and about Mexican folkore. The band was already releasing an EP called “Songs from … END_OF_DOCUMENT_TOKEN_TO_BE_REPLACED