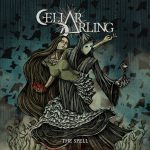 Rating: 9.5/10 Release: 20 March 2019 Label: Nuclear Blast Cellar Darlings new cd The Spell is a pleasure for me to review. I have been a fan of Anna Murphy from her time with Eluveitie and of course I was saddened by the band split that occurred. I have been … END_OF_DOCUMENT_TOKEN_TO_BE_REPLACED

By: Okan Rating: 8/10 Release: 30 June 2017 Label: Nuclear Blast Records Cellar Darling is a newly formed band from Switzerland. But its members were present under the name of Eluveitie for a long while. When their split was announced back in 2016, the fans were shocked and worried by … END_OF_DOCUMENT_TOKEN_TO_BE_REPLACED