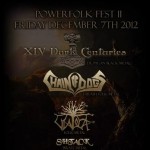 By: Nick Snow, a concert in a faraway town Sittard and a journey by train of almost 2 hours. This could only be a sign for a misery. But this turned out to be OK, we were on time for the first band, Shtack. Shtack Shtack makes piratemetal according to … END_OF_DOCUMENT_TOKEN_TO_BE_REPLACED 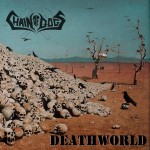 Rating: 8/10 Release: 14 December 2012 Label: Independent Starting with their demo in 2006, Chain of Dogs manages to release an album every two years. In 2010 we got a whole album ‘Gebroake, Gehange en Gewroake’, this time it’s an EP ‘Deathworld’ entitled. This EP contains three real tracks, it … END_OF_DOCUMENT_TOKEN_TO_BE_REPLACED

After a fantastic show, we meet all ‘ugly people’ (see review concert) of Chain of Dogs in the dressing room. That is, I get Olaf, Arne, Tom, Jelle and Willem. Rafke a treat to the eye on stage, but who’s giving the band a lot of extra dimension with her fine voice, had to keep the merchandise-stand open.

The people from Willemeen are good caretakers of their special guests, we were confronted with this when a employee of Willemeen was a little bit suspicious about our intentions. After an explanation we soon could enjoy a nice cold drink, which was very welcome due the very high temperatures today.
We were very curious about CODs experiences regarding their latest CD. The band told me they were very happy with it. It was fun to make another CD. And the band is very content with their label ‘Witches Brew’, which gives the band total freedom to make whatever they like. The band took care of the recordings to lower the costs. The mastering of the album was done by member Willem himself. Besides the fact it lower the costs tremendously, it gives freedom to the band to create something they like. Something that gives them the feeling they created something of their own. The band is planning to record something with others, the label gives the band the freedom to do something like this.

Remarkable with Chain of Dogs is the fact they have a mix of English and Limburgish songs. We were curious why they choose to do this. We think Limburgish fits seamless to the happy willful songs. Olaf: ‘I like English a lot and I studied it also. I love to read English books en watch English movies. A lot of lyrics are based on stories I read in all kind of English literature. It’s for me quite difficult to translate this into Limburgish. My thinking pattern is in English when I’ve read this.’ Arne adds to this, he as a pagan metal and folk-metal fan likes it to express yourself in your own language. The roots of this guys go deep into the Limburgish soil. Singing in Limburgish is a fine way to express their pride of their ‘being a Limburger’, it’s a way tot act against the feeling they’re are somewhat less civilians in the eyes of the people of the western part of the Netherlands. This is a feeling well known with the people form the eastern half of the Netherlands. But with folk-metal, bands from the Easter part hit back very hard, Chain of Dogs from Limburg, Heidevolk from Arnhem, and Baldrs Draumar from Friesland dominate the folk-metal in the Netherlands.

High on their list of wishes are partners for two band-members, some others note they should probably be coughed then. We won’t reveal the members who regard this, we think in the end everything will work out fine them too.

Another one the valid wish to become big with their own Music. A nice tour of a few nice gigs throughout the country should of course be very helpful with this. In the Netherlands the bands star is rising, recently the band had a couple of gigs in Friesland. But their still parts of the Netherlands which were never exposed to the contagious music of Chain of Dogs. The band thinks Germany limits their lust to expand, because it’s very difficult to get some gigs on the other side of the so near border. Germany is together with Finland the cradle of folk-metal and it’s much easier for a German or Finnish band to reach the venues than it is for a Dutch band. Up-till now only Heidevolk has made it to Germany. This is why the band pulls together with the Finsterforst. In this way it’s somewhat easier to get gigs in Germany. But on the other hand is simply very nice to operate next to these guys. A nice thing about Finsterforst is their in complete control of their own gigs. The Dogs learned form other bands who have signed with a ‘nice label’ or booking-agency, they have sometimes less gigs, because of the higher pricetag they have. A band like Gernotshagen attracts not many more people than a band like Finsterforst, but they cost a lot more. Together with Finsterforst they can give venues a nice deal and make it attractive for the smaller venues to book them.
Some other good news, is the fact the band is busy with the first preparations for another EP. There should be 3 of 4 tracks on it, and it should be released in 2012. They’re very busy writing and refining songs for this, there are meant to be new songs on this album.

Before we say goodbye to enjoy some Finsterforst, I’ll ask the guys if there’s anything they want to say to us. Finally they made a clean breast “Viking-metal from Italië can’t be taken seriously”. With a statement like this I grab my seat again: What do you mean by that?

Olaf likes to explain this statement. Folk-metal and related music, also because of the internet, become a genre which draws attention all over the world. In the wake of this everywhere in the World band bands are born which are involved is this music. But instead of being busy with their own roots and mixing their own folk with metal, you see more and more bands form exotic places playing Viking-metal. That is without rhyme or reason. Viking-metal from Italy…

Create something of your own. And with their true ‘Limburgish’ sound the band has a say in this matter. You can’t speak of Chain of Dogs as a band that goes along with the stream, they’re obviously doing something of their own….
And we’re proud of them!

Location: De Baroeg, Rotterdam 20 November 2011 Photography: Metalshots.com (1st day of tour in Mullheim, DE) With all the big Rock the Nation tours going around lately, one should almost forget there are also some smaller tours dwelling around. Black Trolls over Europe is one of them, a tour which … END_OF_DOCUMENT_TOKEN_TO_BE_REPLACED 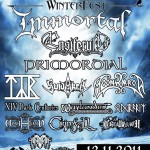 Location: RWE Halle, Mülheim an der Ruhr (DE) 12 November 2011 Photography: Feenstaub Entertainment 10:00 a.m. The doors should be open because 10:20 should sound the First notes through this hall, but it’s almost time and the doors are still not open? The queue is immense (fortunately we as reviewers … END_OF_DOCUMENT_TOKEN_TO_BE_REPLACED

Location: Willemeen, Arnhem 4 juni 2011 Chain of Dogs Ladies and Ugly people, Tonight there’s a super performance in the program booklet of Willemeen in Arnhem. There is no folk-metal concert in Arnhem passed without our presence, and with bands like Chain of Dogs of all. The Limburgians started to … END_OF_DOCUMENT_TOKEN_TO_BE_REPLACED

Rating: 8/10 Release: 10 December 2010 Label: Witches Brew Damn we just received a new album, I’ve listened to it just one time and I’m instantly feeling ‘Gebroake, Gehange en Gewroake (oh no, that last one might not right), the title is in the Limburgian dialect and means Broken, hanged … END_OF_DOCUMENT_TOKEN_TO_BE_REPLACED