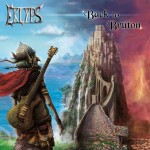 Rating: 6.5/10 Release: December 2016 Label: Independent Not an overly productive bunch these French ensemble. In almost 20 years, only one full album has been released, along several demo’s and one earlier EP. In the end of 2016 ‘Back to Bruton’ saw the light of day. Five songs, each between … END_OF_DOCUMENT_TOKEN_TO_BE_REPLACED