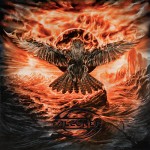 Score: 8,5/10 Release: 6 June 2014 Label: Metal Blade Records The Swedish Folk/power metal band Falconer just released their 8th studio album this month. There has been some time between this album and their last one ‘Armod’, which was released in 2011. The whole album ‘Armod’ was recorded in Swedish … END_OF_DOCUMENT_TOKEN_TO_BE_REPLACED