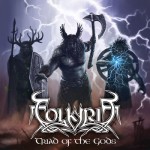 Rating: 7/10 Release: 26 February 2014 Label: Independent Folkyria is a rather new band, formed in 2012. But they decided it’s time to let the world know what they’re up to, so they released an EP ‘Triad of the Gods’. How do you make Folkyria? Take a large amount of … END_OF_DOCUMENT_TOKEN_TO_BE_REPLACED