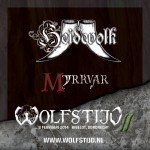 Photography: Eline Venue: Bibelot, Dordrecht, Netherlands Date: 8-2-2014 Do we still remember? At the start of 2012, the first edition of Wolfstijd took place. A festival that offered a stage to several folk, black and powermetalbands. After we didn’t hear from them for a while, suddenly there was the announcement … END_OF_DOCUMENT_TOKEN_TO_BE_REPLACED 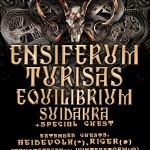 5, 6 October Oberhausen and Tilburg Every folk- and paganfan knows it by now; Heidenfest. This year it was hard to escape this great feast. With a various mix between large bands like Ensiferum, Equilibrium and Turisas, and small bands like Winterstorm and Frosttide, it promised to be a great … END_OF_DOCUMENT_TOKEN_TO_BE_REPLACED 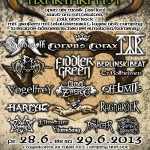 The last weekend of June is just like last year reserved for my favorite festival of the year, Hörnerfest. Just like last year this small festival near Hamburg had and amazing line-up, but next to epic bands, Hörnerfest has so much more to offer. Friday morning early the festival weekend … END_OF_DOCUMENT_TOKEN_TO_BE_REPLACED 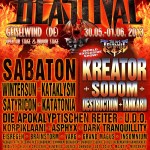 Location: Geiselwind, Germany The news about Bayern was pretty bad lately. Heavy rainfall, flooded basements, mudslides and landslides. But still the line-up of the very first edition of Beastival was irresistible, so we jumped in our car for this new German festival. Sabaton, Kreator, Kataklysm, Wintersun and many other great … END_OF_DOCUMENT_TOKEN_TO_BE_REPLACED 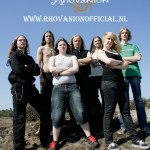 Date: 18–5–13 Location: Estrado, Harderwijk It’s a cloudy saturday evening when all metalfans from Gelderland head for a town called Harderwijk. Estrado is quite a new building with enough parking space and I must say it’s a beautiful hall. The first band of the evening was Myrkvar from Nijmegen. This … END_OF_DOCUMENT_TOKEN_TO_BE_REPLACED 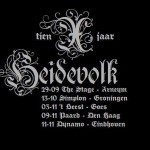 Heidevolk exists for 10 years! Reason enough to celebrate this with several concerts. Dynamo in Eindhoven was the last in a series of 5 concerts to celebrate Heidevolks birthday. And I can be short about it; the show was close to perfect. Just to be sure, I’m not going to … END_OF_DOCUMENT_TOKEN_TO_BE_REPLACED

A free festival? I never say no to that, especially when bands like Lemuria and Heidevolk are playing! Folk-metal.nl went to Dessel Swings to see how these bands would play. A special ‘Graspop-stage’ was established in the parish (oh, the irony!), Where different bands would play throughout the day. The … END_OF_DOCUMENT_TOKEN_TO_BE_REPLACED 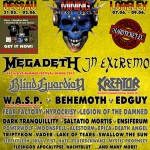 Location: Loreley, Duitsland Photography: Laurie Roijackers Besides the traveling series of concerts like Paganfest and Heidenfest, Rock the Nation is working on their own touring festival called ‘Metalfest’. Biggest concern of this was that there weren’t any plans for this festival to come near Holland. This changed with the coming … END_OF_DOCUMENT_TOKEN_TO_BE_REPLACED 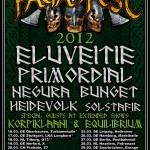 Location: 013 Tilburg We have a fixed value in the folk-metalscene for over a couple of years now, it’s called Paganfest. This years also the whole company travels through Europe, and also this time they have a varied line-up. Unfortunately due to some interviews we had with Eluveitie and Equilibrium … END_OF_DOCUMENT_TOKEN_TO_BE_REPLACED

Just a week after the release-party Heidevolk stood at Into the Forest part II in the Baroeg, Rotterdam. The supportacts gave away a good show, but it was nothing compared to the fabulous show of Heidevolk. Folk-metal.nl spoke with Raemon and Rowan after the show.
3rd March the new album ‘Batavi’ was released. Compared to the previous albums it’s a lot heavier and less folk. ‘We always worked with a rock producer and despite of the fact this lead to good albums, we we’re in for something heavier’. We met in a pub in Arnhem (Café de Beugel, Arnhem, red.) and brainstormed about this. We had already wrote some quit aggressive tracks, but what should we do with it?
‘We wanted more metal and it works when you’re working with a capable metal-producer. We ended up with Peter Tägtgren. Peter has already produced a lot of nice metal-albums. He’s the one who managed to put the aggression in the record and gave the dark touch to Batavi.’