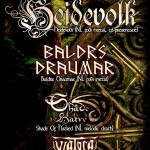 Luxor Arnhem25 februari 2012 Pff, it’s hard to be a reviewer sometimes, you always want to write a decent and objective review, but sometimes this doesn’t sound ‘nice’. So I love it, but it’s not always a funjob. Where to begin with Heidevolk’s Straalschijfontketenfeest? I think I start of with … END_OF_DOCUMENT_TOKEN_TO_BE_REPLACED 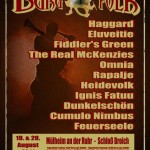 Schloss Broich, Mülheim an der Ruhr (DE) Cumulo Nimbus We’ve got a nice rest and very good breakfast, and then it’s time to got to the castle, we parked the car, I attached some armour plating and we’re ready to go inside. We’re staying in the shadow for awhile on … END_OF_DOCUMENT_TOKEN_TO_BE_REPLACED 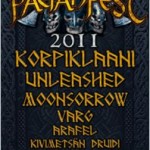 Location: Turbinehalle, Oberhausen (DE) 13 March 2011 Photography: Metalshots.com (Paganfest Tilburg) Wow! What a lineup, paganfest has in store this year. By far the best since 2008, when I first went to this annual tour. When we entered the venue, we received a fistful leaflets and even a cd with … END_OF_DOCUMENT_TOKEN_TO_BE_REPLACED 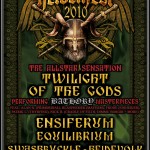 Heidenfest 2010 Tivoli, Utrecht, Netherlands 19 September 2010 It’s time for the Heidenfest tour again, the tour visits the Netherlands as well this year and we decide to visit the tour in our own country this year. Rock the Nation has managed to put down a nice line-up this year … END_OF_DOCUMENT_TOKEN_TO_BE_REPLACED 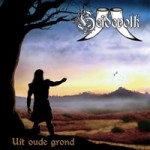 Rating: 10/10 Release: 26 March 2010 Label: Napalm Records Already spoiled by “Nehalennia” which was already available on myspace, I put this ray disc in the player. I know the first track very well already, so I will skip over but just for convenience. “Ostara” is also a very beautiful … END_OF_DOCUMENT_TOKEN_TO_BE_REPLACED 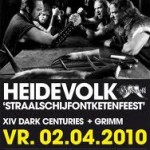 Luxor, Arnhem, The Netherlands 2 April 2010 Photography: Metalshots.com The cd presentation of the new Heidevolk-album with Grimm and XIV Dark Centuries as support. Grimm Finally I can see one of our own Dutch bands at work, again. The show starts nicely with a suitable film in the background. The … END_OF_DOCUMENT_TOKEN_TO_BE_REPLACED

De Kade, Zaandam, NL12 june 2009 Grimhorde Unfortunately I missed almost the complete set of Grimhorde. I have got to see the last three songs. With seven man is quite busy on stage. The guitarists were a bit quiet, but could be due to lack of space. The songs I … END_OF_DOCUMENT_TOKEN_TO_BE_REPLACED

Location: De Lantaarn, Hellendoorn, BL 11 April 2009 The promotiontour by Tyr and Alestorm is visiting Hellendoorn. Heidevolk is support act and Adorned Brood is joing in this part of the tour as well. Adorned Brood I apoligize to the bands of this band, but it’s the third time I … END_OF_DOCUMENT_TOKEN_TO_BE_REPLACED