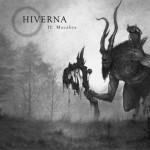 Rating: 7.5/10 Release: 6 June 2014 Label: Oaken Forge Hiverna is a Canadian Folk Black Metal band from Québec that was established by Bardunor, a black metal musician who is active in several musical projects. After a split-album that was released in 2008 the band released its debut album ‘I. … END_OF_DOCUMENT_TOKEN_TO_BE_REPLACED