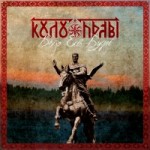 Rating: 7/10 Release: 9 November 2012 Label: Independent Kolo Pravi is a Folk Pagan Metalband from Belarus. The first album of Kolo Pravi ever, they released a demo in 2009, but now there’s this real album. This is self released album and that’s no shame. But when you do a … END_OF_DOCUMENT_TOKEN_TO_BE_REPLACED