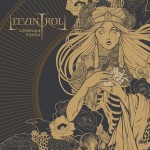 Rating: 8,5/10 Release: 15 April 2013 Label: Sound Age Productions It’s been a while since Litvintroll released their previous album. It takes us back to 2009 when their album ‘Rock’n’Troll’ was released, but now they’re back with ‘Czornaja Panna’. When this album was about to be released their friend Aleh … END_OF_DOCUMENT_TOKEN_TO_BE_REPLACED