Mael Mórdha is an Irish band which has a fabulous new album, the band has a beautiful name, so this gets us curious, what does this name mean or is made up by somebody, we spoke with Shane Cahill, drummer in this great band?
Back in 98 the line-up of the band Uaigneas was changed and Rob came up with the name Mael Mórdha. Later, when reading a biography of Brain Boru, High King of Ireland, he realised that Mael Mordha was Brian’s arch nemesis and thus the name of the band. He thought it sounded good and fit with-in the sensibilities of the sound he was aiming for at the time.
Mael Mórdha isn’t only a name from ancient history, the band is rather old itself. A lot of bands don’t survive for 10 years and Mael Mórdha is way past that. And they’re are quite known with insiders of the genre, but it seemed they never really got out of a rather small audience. They have been ‘plugging away to varying degrees’ over the best part of the last 15 years. They have 3 albums out and a split 7” with Primordial and have played shows all over Europe too. They obviously have been busy all these years. But apart from that, the members have been living the ‘normal’ life… Folk-metal.nl is of the opinion they could be become a lot better known with their new album ‘Damned when Dead’ out. 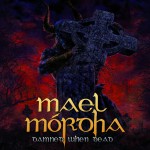 Rating: 9/10 Release: 16 September 2013 Label: Candlelight Records After three years Mael Mórdha is hitting us again with an album. They released Manannán in 2010, an album which was received quite good. A lot of people thought of this as their best album so far after the release of … END_OF_DOCUMENT_TOKEN_TO_BE_REPLACED