Between Humans an Nature

Mandragora Thuringia was founded in 2008 as a cover band and at that time, in its infancy, they did a lot of musical exploring, being influenced by bands like Alestorm, Korpiklaani and Sabaton. The band really began to take off in 2016 with independently releasing their first EP “Mandragora Erwacht” (Mandragora Awakens) that brought forth some live shows which saw the band gain some fan base and popularity. In 2019 they released ‘Der Vagabund’, and had shows planned to support the new release when the global pandemic hit and brought things to a sudden stop as with most musicians.  While a lot of newly formed bands gave up and parted ways, Mandragora Thuringia went into overdrive mode writing new songs and used the time to write the new album “Rex Silvarum’. 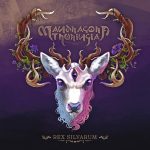