From Dawn to Twilight

Sweden’s Midvinterblot have issued their debut album entitled “Skymning” and what an impressive debut it is. Blending traditional instrumentation with upbeat metal has never sounded so good and has a potential to be on a multitude of top debut album lists. Drummer Samuel Byström was able to answer some questions for us regarding the new album, the writing and recording process and a few other things, check it out!

Congrats on your amazing debut album “Skymning”, what have you received as far as feedback regarding it so far?
“Thank you very much! Thus far the feedback has been really positive, I get the impression that Skymning has struck home with many listeners. Especially “Gammeldans” I have heard good things about, which feels reassuring as it is a track that I feel showcases many of our musical strengths both technically and sound-wise.”

Rating: 9/10 Release: 21 December 2016 Label: Independent If you are a fan of the podcast then you know I recently played a new single from Sweden’s Midvinterblot called “Hörgr” and I thought that was going to be it for a while. Well, I couldn’t have been more wrong as … END_OF_DOCUMENT_TOKEN_TO_BE_REPLACED 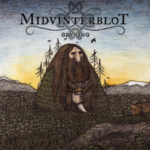 Rating: 8/10 Release: 24 July 2015 Label: Independent It has been 3 years since we heard from Midvinterblot after the release of their début single, the epic “Rise Of The Forest King”. They have returned from the forests of Sweden boasting 8 members now and offer a new 5 song … END_OF_DOCUMENT_TOKEN_TO_BE_REPLACED