1. Baldrs Draumar ‘Magnus’
Baldrs Draumar pulled it off. Grimner managed to receive this title in 2016 and 2018, the first band who managed to get the title twice. Baldrs Draumar did this as well. In 2017 they won this title with their acoustic album ‘Fan Fryslâns Ferline’, this year they released a new Metal album ‘Magnus’ and it was chosen as the best album by again two voting members, but they received a few points more from the rest and they ended up with 40/70 points. Truly a great achievement for an independent band.
“Bone breaking riffs, perfectly placed vocals of primary clean, heavy and choral variety (a lot of really cool choral stuff), driving and tasteful rhythm choices, acoustic instrumentation….I can’t find a single negative. There are a lot of up-tempo tracks on here as well which never sound sloppy or out of control but methodical and well planned. The lyrics are in Frisian, which I still feel is the best choice they have made since switching back after “Forfedres Fortellinger” which was in English. For those of you concerned about the “new” sound do not fret….there is enough of the more familiar mixed in throughout while they branch into some new territory. The overall sound is gnashing and smooth with a subtle bite to the overall sound, both being heavy and inviting at the same time.  Let the naysayers be damned for this is Baldrs Draumar at their finest. Lest you think we are rooting for the home team here at the site, I live in the US and know this is the real deal. For those waiting for the next slew of metal albums from whoever in Scandinavia, eastern Europe or the US for that matter, you need only travel to Dokkum on the North Sea to find the best folk metal album of 2019. “ 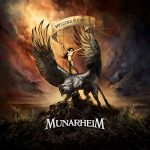 Rating: 7.5/10 Release: 3 May 2019 Label: Independent Willens & Frei is the third full-length album from German Symphonic Metallers, Munarheim. Yes, you read that right, because as far as I am concerned, like many other bands that find them classified as such, Munarheim are not Folk Metal at all, … END_OF_DOCUMENT_TOKEN_TO_BE_REPLACED

After the EP ‘Liberté’ in 2013, and the albums ‘Nacht und Stürme werden Licht’ in 2014 and ‘Stolzes Wesen Mensch’ in 2015 we had to do without new releases of Munarheim for a while. But now they’re back with a beautiful new album ‘Willens & Frei’, delivered in German and international edition. The style of the band is a very exclusive one with distinctive vocals, harsh, sad, full of pain. There is a nice contrast of these vocals with the light flutes and whistles and there are these awesome choirs and orchestrations. Time to chat with singer Sebastian about all these things. 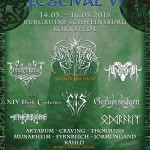 By: Nick Bornstedt, Germany 14-5 / 16-5 2015 The most common discussion when the festival season starts is always about which festivals to visit, especially since there’s so much choice nowadays! There’s just one festival that’s been on the calendar as soon as the previous edition ended, and that’s the … END_OF_DOCUMENT_TOKEN_TO_BE_REPLACED 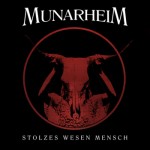 By: Jeff Rating: 8,5/10 Release: 11-5-2015 Label: Independent Just when you have maybe become fully immersed in Munarheim’s epic 2014 release “Nacht Und Sturme Werden Licht” (“Night And Storms Will Light”) they enter 2015 with another entirely new album with “Stolzes Wesen Mensch” (I am translating as “Nature of Human … END_OF_DOCUMENT_TOKEN_TO_BE_REPLACED 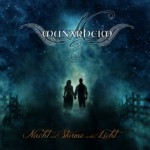 By: Nick Score: 9/10 Release: 22-2-2014 Label: RecordJet In 2013 we already got a slight hint of Munarheims capabilities with the EP ‘Liberté’. Now it’s finally time for the first full-length of this German band which got, besides the beautiful artwork, the title ‘Nacht und Stürme werden Licht’. First things … END_OF_DOCUMENT_TOKEN_TO_BE_REPLACED 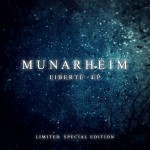 By: Gur Score: 8/10 Release: 1-3-2013 Label: independent Previous to their debut-album, which will be released in early 2014, the German band Munarheim has released an EP called Liberté. My first impression of Liberté is fine! A simple but atmospheric cover of a starry night and some trees. A cover … END_OF_DOCUMENT_TOKEN_TO_BE_REPLACED