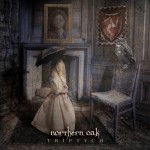 Rating: 8.5/10 Release: 29 November 2015 Label: Independent For you diehard Northern Oak fans, this new EP from these Sheffield Englanders may not offer much in the way of new material, especially if you contributed to the Kickstarter campaign for their last album “Of Roots And Flesh” from 2014. This … END_OF_DOCUMENT_TOKEN_TO_BE_REPLACED

Rating: 6.5/10 Release: 4 October 2014 Label: Independent It doesn’t happen often, especially not in the folk-metalscene; an album that is financed entirely with a kickstarter. Before the recording of the album started, Northern Oak asked their fans to pledge a certain amount of money, to pay for the recordings. … END_OF_DOCUMENT_TOKEN_TO_BE_REPLACED