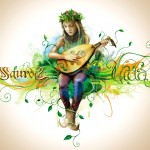 Rating: 8,5/10 Release: 1 December 2012 Saurom is a well known band in Spain and Spanish speaking countries. While over here in the Netherlands only a few people know this band. And why, I don’t know. It’s typically Spanish folk-metal that’s for sure, but it’s very nice. It’s not for … END_OF_DOCUMENT_TOKEN_TO_BE_REPLACED