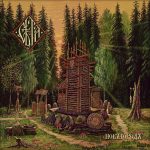 Russian folk/black metal band Sieta’s new album “Novgorod”, set to be released in June via Earth And Sky Productions. “Novgorod” tells the story of the ancient city of Novgorod, which resisted the Knyaz during the baptism of Rus and started an uprising. The album combines folk and black metal elements to show the contrast between paganism and Christianity. They also achieved this through the lyrics, which are written in two ancient languages: Old Russian and Old Church Slavonic.