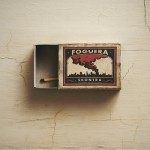 By: Vinicius Rating: 7.9/10 Release: May 2015 Label: Independent After five years and changes in band members, the Spanish guys from Skontra released your new album ‘Foguera’ (bonfire). Of the 13 tracks, two are covers – from RIP and Xéliba – and one acoustic version of the album’s theme ‘Foguera’. … END_OF_DOCUMENT_TOKEN_TO_BE_REPLACED