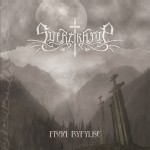 Rating: 7/10 Release: 20 June 2014 Label: Independent The Norge folk-influenced Pagan Black Metal band Sverdkamp started in 2010, but they thought it would be a nice to take things one step further and they released a demo. A limited edition of this EP ‘Fraa Ryfylke’ can be purchased at … END_OF_DOCUMENT_TOKEN_TO_BE_REPLACED